There are a large and diverse range of beneficial insects in most gardens and one of the most easily recognised and of the most benefit to gardeners is the humble lady beetle. Ladybird beetles are great friends to have in the garden as they are fantastic predators of common garden pests such as aphids, scale insects, whiteflies and mites. Most species of ladybird beetle will consume over 2500 soft-bodied insects over their lifespan, which makes them one of nature's best natural pest control solutions.  Not only do these useful little insects help with pest control, they also help to pollinate plants as they move from one plant to another.

Known by many common names, the ladybird, ladybug or lady beetle is part of the larger beetle population belonging to the family coccinellidae. Found throughout most of the world there are around 500 species in Australia alone.

The most well-known and easy to recognise ladybird beetles are red with black spots, but they come in a large range of colours, patterns and sizes. Ladybird beetles vary between species with regards to their preferred environment, habitat and diet. Some varieties of ladybird beetles have been released for agricultural control purposes with great success in being able to specifically target a particular pest infestation.

Below are some of the more common varieties of ladybird beetle which you may find in your own home garden.

Transverse ladybird beetle (Coccinella transversalis) are 5mm long and bright orangey red with a central dark stripe down the middle of their back and v shaped markings on each side. They eat aphids, leaf hoppers, boll worms and scale, and are often found in vegetable or ornamental gardens.

White collared ladybird beetles (Hippodamia variegata) are 6mm long with an orange, slightly arrow shaped body featuring at least two but usually more black spots and a black head with white patterns on their face and collar. They enjoy a diet mainly consisting of aphids, thrips, whitefly, scale and mites. This species is often found in flower beds and vegetable gardens.

The Common Spotted ladybird beetle (Harmonia conformis) is one of the larger species at 8mm long. They are orange to dark orange with 20 large black spots on their incredibly shiny exterior (including 2 on their head). They eat aphids, scale, mites, thrips and moth eggs, and are often found in flower beds, vegetable gardens, orchards, on sunflowers and roses. Tasmanian or southern ladybird beetles (Cleobora mellyi) are around 7mm long and medium yellow orange with prominent zigzag black lines. They are often found on eucalyptus and acacia trees or on tomato and potato crops. They are predators of eucalyptus tortoise beetle eggs and larvae as well as consuming tomato and potato psyllids and aphids.

Steelblue ladybird beetles (Halmus chalybeus) are 4mm long and are some of the least recognised of their species. They are small and helmet shaped with an iridescent dark metallic blue exterior. Commonly found on or around citrus, they eat nectar, sap, moth eggs, black scale, mites and aphids.

Fungus-eating ladybird beetles (Illeis galbula) are 5mm long and are easily recognisable with a shiny black coloured exterior and bright yellow spots. This great garden companion specifically feasts on plant fungus. These lady beetles are often found on crops such as zucchini and pumpkins which are highly susceptible to powdery mildew and consequently provide a valuable food source for this species. The mealybug destroyer ladybird beetle (Cryptolaemus montrouzieri) is 4mm long and have a dark green body covered in short fine hairs and reddish-brown head. They are a great organic solution, specifically feasting on mealybugs and mealybug larvae. This ladybird beetle is often found on home orchards or citrus trees where outbreaks of mealybugs are present.

Yellow shouldered lady beetles (Apolinus lividigaster) are amongst the smallest at only 3mm. They are a dark greeny-black and covered with fine white hairs and have bright yellow shoulder patches and occasionally a yellow head. Their diet mainly consists of aphids and they are often found on eucalyptus trees and in open woodlands.

Vedalia ladybird beetles (Rodolia cardinalis) are 3mm long and have a shiny black exterior with red edges and red spots. They specifically eat cottony cushion scale and are commonly found on citrus plants.

Striped ladybird beetles (Micraspis frenata) are 4mm long and light orange with 3 black stripes running vertically down their back. They eat fungus specifically found on grasses as well as pollen and nectar. They are often found on native grasses.

The Tortoise Shelled ladybird beetle (Harmonia testudinaria) is 6mm long and yellow to light orange with black net-patterned exterior. They are commonly found in north Queensland.

28 spotted or leaf eating ladybird beetles (Henosepilachna vigintioctopunctata) are around 10mm long and a mid-orange colour with 28 small black spots. Unlike most other ladybird beetles this species are considered to be a garden nuisance as they eat a range of plants with preference to potato, bean, tomato and eggplant family. Unfortunately the 28 spotted Ladybird beetle often get confused with the common spotted ladybird beetle due to their similar colour and patterning. An easy way to distinguish between the two varieties is the size of their spots. The ‘good guys’ have 20 large black spots (including 2 on their head) and a very shiny exterior compared to the 28 small black spots found on the less shiny exterior of the leaf-eating species.

Ladybird beetles have a fascinating life cycle. They overwinter as adults in protected corners of gardens, under mulch, rocks and on tree bark. Once spring arrives and the temperature and daylight hours increase the beetles become active in search of mates, food and areas to reproduce. When the female has found a suitable mate, she will find a place to lay a cluster of eggs, most likely on the underside of a leaf or near an aphid, scale or whitefly colony to provide food for her young when they hatch. Ladybird beetle eggs are small 2mm and oval shaped usually yellow to cream in colour.

Ladybird beetle eggs hatch in around 4-10 days as larvae. The larvae are also avid consumers of soft bodied insects (as well as eating the other unhatched ladybird beetle eggs) and will feast for around four weeks on pests before pupating. During the larvae stage ladybird beetles moult four times into four different stages of instar leaving behind their exoskeleton each time to increase in size. Once large enough to pupate they will attach themselves to leaf surfaces or bark until they are ready to hatch out of their casing as adult ladybird beetles. 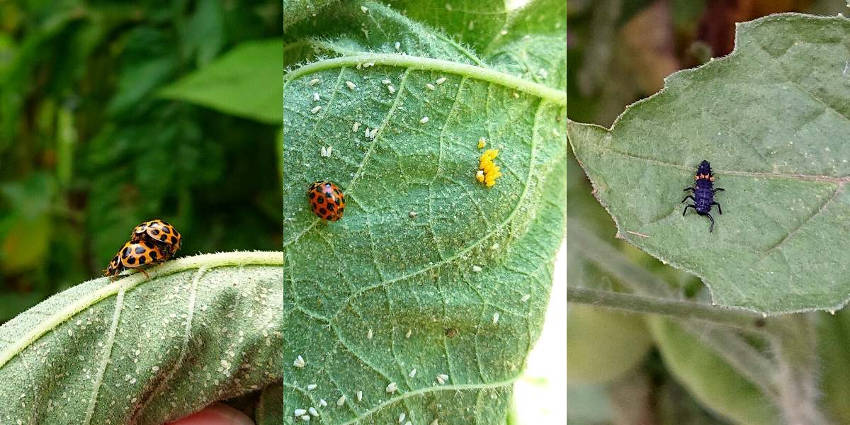 It takes many hours for a freshly hatched ladybird beetle to harden their exterior, dry their wings and develop their colours. Adults will begin to mate and start the lifecycle again when they are only a few days old. Older ladybird beetles are larger with deeper colouration than young adults and the average lifespan of a ladybird beetle is around a year. Adult ladybird beetles have a pair of wings folded neatly under their elytra (shell) which enables them to fly between plants and to find a mate. Though they typically only fly around 2 minutes and for only a few meters, they are capable of flying long distances up to 100km at speeds of up to 60km per hour.

Attracting them to your garden.

Provide them with plenty of foliage and bark and mulch to over-winter and take shelter in.

Leave aphids, scale, thrips and whitefly populations untouched so that they have an adequate food source. Use pesticides or insecticides as a last resort.

Ladybird beetles love to exist in a well-watered garden as they require moisture to drink, they also drink nectar so lots of flowers will encourage them to visit.

Summer is a great time to get out in your garden and have a look for ladybird beetles. Mid to late summer is the middle of their breeding season so if you have a healthy population of ladybird beetles you should start to see larvae, pupae and adult beetles on your plants.