Purposefully ripping up healthy young plants may seem a strange and destructive thing to do, especially if they've come from seeds you've sown yourself. But for many plant species it's an essential part of successful cultivation. The process is known as thinning or thinning out, and here's why it's so important.

Why Do Some Seedlings Need Thinning?

In the wild, plants have only one goal in life: to produce the seeds that will form the next generation. Any desirable side effects such as tasty fruits or spectacular floral displays are secondary to this purpose, and are largely the result of human-influenced selective breeding down the centuries.

The problem comes when a plant doesn't have the right conditions to grow at its own pace. When resources are short for whatever reason, the plant will push all its energies into forming those essential seeds, and the desirable side effects will be lost. The harvest will be poor or non-existent, the flowers will be fleeting and unimpressive, and so on. For example:

One of the main reasons for a lack of resources is when plants are grown too closely together. Overcrowding means they're fighting for room in a small patch of soil, depriving each other of nutrients, water, and sunlight. Thinning out is the simple method of reducing the number of plants in any one space, so that each can take the resources it needs to grow healthily.

Why Not Space Correctly From the Start?

However, while plants will appreciate plenty of room, gardeners will want to get the maximum out of their growing space, and so a balance needs to be found between overcrowding and being wastefully sparse.

What's more, sowing tiny seeds such as lettuce to their correct spacing is next to impossible. It makes much more sense to scatter the seeds fairly randomly, and then use thinning later to take care of spacing.

Many relatively sturdy plants such as zucchini, tomatoes, or runner beans can be sown in pots or trainers, and the seedlings later planted out in the open soil at the correct spacing. With these species, thinning isn't always necessary. Nonetheless, many people still sow two or three seeds into each pot to increase the chance of at least one germinating, then thinning down to one if necessary.

Unfortunately, not all plants can be successfully transplanted, particularly those with tender root systems. The shock of being moved can slow growth considerably, or even damage the plant beyond repair. In these cases, thinning is the only realistic option.

Thinning is a simple process, but here are a few points to guide you along the way.

Ideally, you should thin seedlings once they've grown enough to judge which are the healthiest, and which are the weaker ones to be removed. However, don't wait to long.

If several seedlings are competing for root space, they may have a tough start in life which leaves them permanently weaker. What's more, thinning out a batch of older seedlings can be difficult, risking damage to the ones you want to keep.

In general, consider thinning once the seedlings are showing a pair or two of true leaves rather then the seed leaves they first germinate with.

- Which Seedlings to Thin

If you're thinning seedlings growing in containers, the aim is usually to leave a single, healthy seedling behind in each pot, cell, or pellet. For the open soil, you should wind up at the spacings specified on the seed packet or the growing guide you're using.

When actually thinning, you should remove the least healthy seedlings. These aren't necessarily the smallest, though. For example, tomato seedlings grown on a windowsill may be 'leggy', showing fast but weak growth as they push up toward the light. In these cases, a smaller, bushier seedling may in fact be the healthiest of the batch.

If all seedlings seem to be equally healthy, then ruthless random thinning is the way to go.

Once you've selected the seedlings to thin, choose a tool of the right size. Sharp scissors or similar will help you thin the seedlings you want without damaging their neighbours.

Importantly, disinfect the tool in rubbing alcohol before you start. You may think infection isn't an issue in seedlings destined for the snip, but a fungus or other pathogen introduced during thinning can travel down to the roots and infect remaining seedlings through the soil.

To thin, cut the target seedling across the stem as close to the earth as you can. Don't try to pull the seedlings up completely, as moving the root systems can damage the underdeveloped roots of other neighbouring seedlings.

(In some instances, especially when it comes to root crops like carrots, it may be desirable to pull up the entire plant when thinning, instead of cutting off the seedling at soil level. Grip the stem firmly as close to soil level as possible, while holding down the soil firmly with your other hand.  Gently pull the plant directly up, while trying not to disturb the soil and any neighbouring plants.)

Lastly, once you've thinned to the correct spacing, consider a light application of fertiliser to make up for the nutrients the soil has lost through the thinned seedlings' growth.

Thinning may seem like a terrible waste of good plants, but if you're growing for the kitchen in many cases you can use the thinned seedlings productively.

Many edible plants produce shoots with an intense flavour that packs the mature taste into a few tiny leaves. So if you're thinning pea shoots, for example, use the snipped seedlings in a salad for a burst of sweet, grassy flavour.

The same goes for many herbs, salad leaves, brassica shoots, and many more. If you can eat the mature leaves, then you can eat the thinned shoots too. But take care over tomatoes, potatoes, chillies, and other members of the nightshade family: the foliage contains traces of toxins, even at the seedling stage, and so don't be tempted into an experimental nibble.

For all non-edible seedlings, remove the thinnings to your compost rather than leaving them to rot in place, as some of the more vigorous species can re-root if left on the soil surface.

Taking scissors to your baby seedlings might seem a harsh thing to do, but it's a necessary step for most cultivated species. Your remaining plants will grow much more healthily when given the space to thrive. One of the best things about growing open pollinated vegetables is that you can save the seeds to plant next season. Chillies have some of the easiest seeds to save. Here's a step by step guide to drying and saving seeds from your chilli plants.

How to Save Seeds From Homegrown Chillies Growing On the Grid: Using Square Foot Gardening to Boost Your Harvest 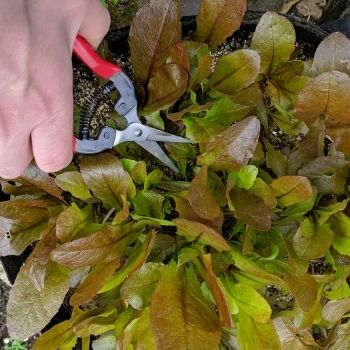