As far as garden pests go, the millipede is a fairly benign one. Most species are diligent members of nature's recycling force, feeding on dead plant matter and turning it into fertile earth. And with their powerful burrowing habits, they also work hard to aerate the soil, further increasing its value.

But unfortunately, millipedes can sometimes turn to feeding on young, juicy plants or their adult fruits. This can be a particular problem if the population outstrips the available food matter, especially in a tidy garden regularly cleared of decaying debris.

If your plants are being damaged by a mystery feeder, especially at night, then the many-legged millipede could be the culprit.

There are around 2,000 native species of millipede, along with many imported ones. Most members of the family are around 20-45mm in length, although a few outliers can reach a mammoth 20cm.

All species have a heavily segmented body, with two pairs of legs for every segment. And while the millipede name might derive from 'a thousand feet', the most legs ever seen on a creature was a mere 750.

Although millipedes are often confused with centipedes, it's important to know the difference between the two families. While millipedes are generally harmless, some centipede species can inflict a nasty sting and shouldn't be handled without a positive safety identification.

Above left: Centipede. Above right: Millipede.

Millipedes are mostly nocturnal, and prefer damp, cool, dark conditions with plenty of decaying organic matter to hand. Most species are solitary and go about their lives quietly unnoticed. However, some species can swarm in large numbers when conditions are right, causing problems in the garden and even indoors.

This swarming behaviour is a particular risk with the introduced Portuguese millipede, which often congregates by the many thousands after autumn rains. This species is distinguished by its dark black colour, along with its energetic movements compared to the more docile native species.

Most species of millipede will curl into a tight coil when threatened, with some also emitting a foul-smelling chemical to repel attackers. While this secretion is lethal to ants and other insects, it isn't poisonous to humans but can irritate the eyes and other sensitive areas.

Millipedes mate in spring, laying large numbers of eggs into moist soil. The eggs will hatch in autumn or early winter, with the juveniles emerging into a fully developed but smaller millipede form. Millipedes can live for several years, with the potential for population numbers to build up significantly under ideal conditions.

Signs of a Millipede Problem

With their nocturnal habits and love of sheltered spots, millipedes are a generally anonymous resident of your garden. But if they start feeding on your plants, there are a few distinctive signs to watch out for, mostly happening overnight.

Depending on the population levels and amount of other food available, millipedes will feed on any and all tender seedlings, as well as mature plants and fruits including strawberries, melons, tomatoes, potatoes, and onions. Parts of the plant touching the soil are most at risk, including trailing leaves and young roots or stems.

Unless you're faced with a hungry swarm of the Portuguese variety, your garden's millipedes are unlikely to cause serious problems. But in any case, a balanced ecosystem is a good thing to aim for, and accepting the animals into your garden while minimising the damage they do is the best way forward.

Here are a few ways of keeping their numbers under control, and keeping them away from their target plants.

Under most conditions, millipedes are welcome residents of your garden. But keeping their numbers under control, while reducing their access to your plants, will help maintain a healthy balance with no need for drastic action. 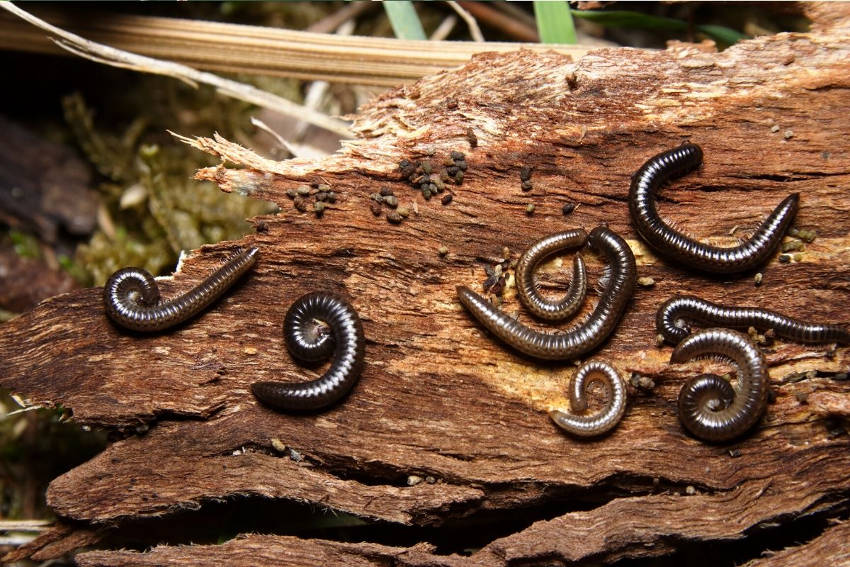