Here in the Semi Tropics, Cucumbers grow quite late into the autumn and perhaps the early winter.  At an elevation of some 800 metres above the coastal areas, the climate is quite different to normal tropical climates, thus the semi tropics; we have distinct seasons, which include a cold winter.

I decided to train the cucumbers up a trellis in order to make space for other vegetables and perhaps to avoid some of the fungus diseases, which are prevalent in a warm, moist climate. Off the ground the vines have good air circulation and little or no contact with soil where some diseases may lurk.  Also I have never grown cucumbers in this part of the garden previously. It was necessary to begin with to train the vines onto the trellis and tie on with string, so that they would not be blown down by wind. Once having established themselves the vines only needed to be pointed in the direction I want them to grow, the tendrils hold them firmly in place. The plants above are quite advanced, this is around late January. To go high rise with cucumber vines seems to have been the right decision, the plants are growing strongly and are very healthy. Also there is sufficient space left to grow Chinese cabbage Michihili in front of the vines. Above: Vines producing fruit and growing strongly (May)

The plank in the pictures above is to walk on so I can see the vines close up. It spreads my weight over a larger area, thus avoiding soil compaction. It is the remains of interior wall cladding, very thin and therefore very light to move around.

Now in May the vines have reached maturity and are beginning to produce cucumbers in abundance. The variety is Marketmore and produces dark green skinned fruit about 20cm long with a delicate flavour.  Although I would want them much larger to save seed this is the ideal size for eating.  Disease resistance is excellent. According to garden guides it should not be possible for me to produce cucumbers at this time of year, only tropical areas. Here it is 26°C falling to 16°C overnight which is hardly tropical at the moment. This is why I coined the term Semi Tropics. Micro climates exist all over the country. See what you can grow that the pundits claim you can’t.

Article and photos by Gregg Jacobson 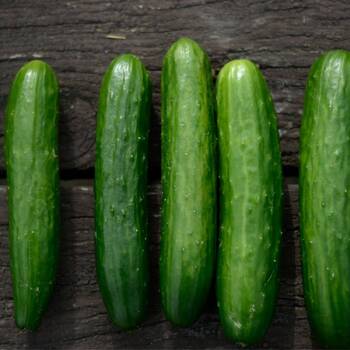 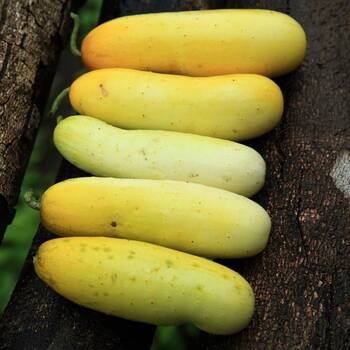