If there's a vegetable that most spectacularly proves the power of selective breeding over centuries, it's the kohlrabi. As a member of the brassica family, it's ultimately descended from the same unremarkable species of wild cabbage as its more familiar cousins, but many generations of development have turned it into possibly the most unique-looking veggie of all.

Botanically known as Brassica oleracea var. gongylodes, kohlrabi's common name is a combination of the German words for cabbage (Kohl) and turnip (Rabi), reflecting its membership of the wider cabbage family combined with it's turnip-like edible, bulbous root.

Kohlrabi's appearance is often compared to the Sputnik spacecraft, boasting a large 'bulb' at soil level with several long thin stems coming off at upright angles, each one topped by leaves. But while kohlrabi is often classed as a root crop, the edible bulb isn't actually a tuber at all, but a bulge in the lower stem, likely an exaggerated version of the hearting characteristics of many of its cabbage cousins.

Kohlrabi comes in two main forms. Those with a green or white bulb are most often sown in spring for an early summer harvest, while red or purple varieties are a little hardier and can be sown in the autumn for a winter harvest. However, all forms of kohlrabi are quick to grow and can be sown at any time that avoids extremes of heat or cold within their two to three month growing period.

Kohlrabi in the Kitchen

Kohlrabi's brassica heritage shows up in its slightly sulphuric smell, but its taste is mild and nutty with a hint of sweetness, similar to broccoli stems. The bulb's texture is moist but crisp when fresh, with a woody peel that gets tougher and thicker with age.

And while the bulb is the star attraction, the leaves are also edible, particularly with the younger plants and thinnings. The most tender leaves and stems are great in salads or stir fries, while older and tougher examples can be treated much like cabbage or broccoli.

Kohlrabi is high in fibre and provides most of the average daily vitamin C requirement in a single portion. It's also a good source of vitamin B6 and several minerals including potassium, calcium, and iron.

Kohlrabi in the Veggie Patch

Kohlrabi is a cool-weather crop with good frost hardiness. It's also relatively drought resistant in mild conditions, but a combination of heat and dryness will quickly turn the bulbs woody and bitter. This means that a sunny position is preferable for quick growth, but in warmer climates partial shade can be helpful.

It grows best in well-draining, fertile soil that's relatively firm in texture without being too heavily compacted. It prefers a slightly alkaline soil with a pH of between 6.0 to 7.5, so consider adding a little lime a month before sowing if conditions are particularly acidic.

Depending on the variety, Kohlrabi should be sown either in early spring or late summer so that the hottest months are avoided. Direct sowing is best, although it can be started off indoors for an earlier harvest, or even grown in containers of at least 30cm. Kohlrabi grows quickly, so sowing a fresh batch every three weeks or so will provide a longer harvesting period.

Sow the seeds 1cm deep in rows 30cm apart, thinning the seedlings to 15cm after germination. Unlike leafier brassica varieties which can often be packed more closely for younger harvests, kohlrabi requires at least the minimum spacing or the bulbs won't form.

Watering should be light but consistent from sowing up to harvest, as letting the soil dry out will turn the bulbs woody and coarse. Weeding is important as kohlrabi's fast growth means it does best with little competition for nutrients, while a weekly feed with a vegetable fertiliser can improve growth in poorer soils.

Kohlrabi should be harvested relatively young to avoid tough and woody roots, and this typically means pulling the plant when the bulb is somewhere between a golf ball and a cricket ball in size. This usually takes around ten weeks from sowing. To harvest, simply cut the stem with secateurs or a sharp knife at the very bottom of the bulb, just above ground level.

Kohlrabi doesn't store particularly well, so it's best to harvest as and when you need it. However, if the bulbs are getting too big for comfort, they can be harvested, trimmed, and stored in a plastic bag in the refrigerator for up to two weeks. And while kohlrabi can be blanched and frozen for longer-term storage, the results are usually only good for soups or stews, so the best overall approach is to make successional sowings to ensure a slow and steady harvest rather than a glut.

Kohlrabi's vigorous growth means it's relatively trouble-free to cultivate. However, birds can be a problem at the tender seedling stage, so consider using netting or cloches for protection until the plant is established. Similarly, slugs and snails can feed on younger plants, so take your usual precautions such as beer traps or organic pellets.

Check regularly for aphids and spray with a mixture of soap and water if necessary, but kohlrabi's preference for cooler weather means major infestations aren't usually an issue.

And lastly, as with other members of the brassica family, kohlrabi can be a target for cabbage moth caterpillars. In most cases only the leaves will be damaged, and the bulbs will be unharmed unless the infestation is severe enough to impact the plant's growth. Nonetheless, using netting is a sensible precaution if there's a history of cabbage moth problems in your veggie patch.

There's no doubt that kohlrabi is one of a kind when it comes to appearance, and this means it's often overlooked as an everyday vegetable. But its easy growth and kitchen versatility makes it well worth adding to your sowing list if you want to try something new. 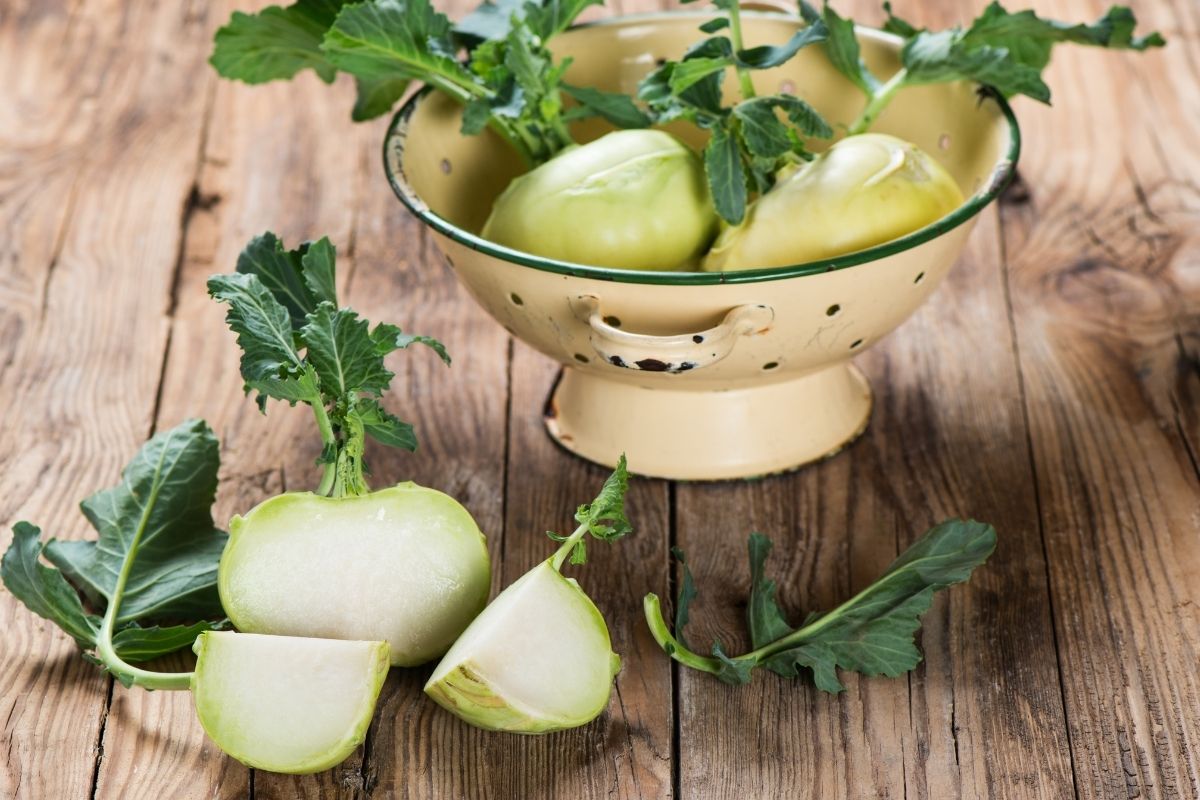