Watercress is a member of the brassica family which grows abundantly in the wild. Known botanically as Nasturtium officinale, it originated in the Mediterranean area before spreading across Europe and Central Asia, but is now naturalised worldwide.

As a brassica it's a relative of cabbages, broccoli, and Brussels sprouts, but its closest family relationships are to plants like mustard, horseradish, and wasabi, with which it shares its distinctive peppery flavour.

In the wild, watercress flourishes as an aquatic or semi-aquatic plant, often found growing in shallow, slow-moving water, particularly in chalky or limestone areas. Historic mentions of the plant go back at least as far as the Ancient Greeks, and it appears to have been first cultivated deliberately in Europe from the 16th century onward.

Watercress is a perennial leafy vegetable consisting of a hollow, square main stem which grows to around half a metre in height. Numerous side stems bear lush, dark green leaves shaped like a rounded heart, or even a cartoonish water lilly.

In the summer, the plant produces tiny, white flowers in long clusters, similar to its other mustard siblings.

Take a close look at virtually any untended creek or shallow pond, and there's a high chance you'll find watercress. Indeed, it grows so easily that in many areas it's classed as weed, and it's a favourite foraging plant as it's so easy to find.

Given it's so widely available naturally, why go to the effort of growing it? The answer comes in the form of a tiny parasitic worm known as the liver fluke. If there are livestock upstream from a wild watercress bed, there's a significant risk the plants will be infected with this worm, which can pass to people when consumed with infection lasting up to thirty years.

Because of this, it makes sense to exploit the plant's eagerness to grow by sowing seeds in conditions you have control over, to enjoy its prolific crop in a disease-free state.

The 'officinale' part of watercress's botanical name means that the plant has a history in traditional medicine. And indeed, the plant has found numerous health uses down the ages. It's most commonly been used as a diuretic and detox agent, but folklore has recommended watercress for anything from toothache to freckles, so it's perhaps wise to take any claims with a pinch of salt.

However, there's no dispute that watercress is highly nutritious. It contains more iron than spinach, and more calcium than milk. It's rich in vitamin E, and has useful amounts of vitamins A and C. Also, it's the best non-marine source of iodine, an important mineral for healthy thyroid function.

Watercress in the Kitchen

Most often, watercress is valued in the kitchen for its peppery crunch. Its leaves can be added raw to salads or sandwiches, or lightly cooked in stir fries and similar speedy dishes.

However, watercress can also be braised or steamed like spinach to be used as a side dish, as a main ingredient in soups, or to bulk out stews.

How to Grow Watercress

Watercress is a perennial that likes full sun or partial shade. It can be sown and grown all year round, but growth will slow or stop in colder weather. Plants will also prefer a little shade at the height of summer or in hotter climates. But the most important factor for growing success is water, and plenty of it.

There are three main ways of growing the plant. If you have the right kind of shallow water in your garden, you can replicate the natural growing conditions of watercress. Germinate two or three seeds in a dish of water. Thin the seedlings to leave a single strongest one, and once it has around half a dozen true leaves it can be moved to a suitably shallow area of running water, or left to float on the surface of a pond.

If you don't have a suitable aquatic habitat, sow two or three seeds in a 30cm container filled with a mixture of light compost, sand, and grit. Keep well watered, and thin the seedlings after germination. Transfer the container to a sunny spot, and place it inside a larger, shallower container that you can keep topped up with water. It's essential that the soil never dries out.

Lastly, watercress can also be grown in the open soil, although consistent watering is vital. Choose a sunny area with rich soil that doesn't get waterlogged. The ideal soil should be a sandy texture for good drainage, but enriched with plenty of organic matter for moisture retention. This point is essential: while watercress loves the wet, if it's grown in stagnant water or waterlogged soil, the roots can easily rot.

Sow the seeds in clumps of two or three, with a spacing of at least 20cm in each direction. Mature plants may need 100cm spacing, but regular harvesting means you can grow more closely. Again, thin the seedlings to the strongest one, and continue to water well throughout the cress's life.

To harvest, simply cut the stems above ground level with scissors, leaving behind at least one leaf pair on each stem to encourage bushier, leafier regrowth.

Watercress doesn't store well. If you're not using it immediately, place the bunches in a jar of water, or wrap them in plastic and keep in the fridge, where you might get a few days' grace. If you're planning to cook the cress, it can be chopped and frozen.

Watercress is a tough and prolific grower, and serious problems are rare. As with any leafy plant, slugs and snails can be an issue in the early stages of growth, but mature plants can usually withstand any attacks.

Aphids and spider mites can take an interest, but frequent inspection and removal is usually enough to keep them under control. Likewise, brassica-loving caterpillars may be attracted to your watercress, but so long as the infestation doesn't run wild your plants will usually shrug off the damage.

If you find the peppery taste of watercress irresistible, growing it yourself is easy and rewarding. Just a few seeds can give you a prolific crop, ready to pick and eat whenever you want that mustard edge to your meals. The leaves of lemon verbena are the most lemony of any herb. Their floral citrus scent that is ideal for making herbal tea infusions and summer drinks, or just to brush past in the garden. Here's what you need to know to grow this reliable perennial.

Lemon Verbena: A Zesty Addition to the Kitchen Garden Don't just let your lavender sit in your garden. Harvest it at the end of the season and utilise it in your home. Whether you like to bake or need to add little relaxation to your life, there is a way for you to make the best of the lavender you've grow. Watercress is easy to grow, and produces huge amounts of peppery, spicy leaves packed with excellent nutritional value. This article describes the plant and gives tips on growing it successfully. 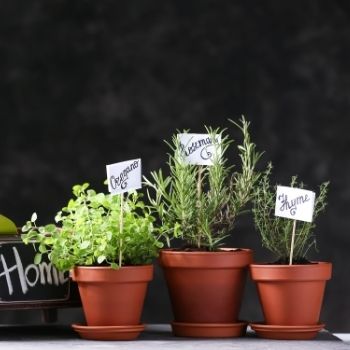 Growing your own herbs brings a new dimension of freshness and flavour to your cooking. If you’re not ready to start full herb garden, you can still do plenty with a few pots. This article gives five simple but essential tips for cultivating tasty herbs