Winter isn't usually the busiest time for a veggie gardener. There may be a few frost-hardy crops still in the ground, and it may be fun planning sowings for the coming spring, but for most people the colder months don't see much growing going on.

But you can still provide some fresh produce for the table in the form of sprouted seeds. Great for salads, sandwiches, smoothies, and stir fries, sprouts are packed with nutrition and add a burst of homegrown flavour that can be difficult to find when your veggie patch is at its least productive.

And best of all, sprouts are quick and easy to grow at any time of year. All you need are some spare seeds, a few pieces of ordinary household equipment, and a few days of anticipation.

How to Grow Sprouts

The basic method for growing sprouts is to put seeds and water into a jar and cover it with a muslin lid. Place the jar in a cool, shady place like a cupboard, and leave to soak overnight or until the seeds have doubled in size. Drain the water away through the muslin, and return the seed jar to the shady place. Twice a day, rinse the seeds with cold water to remove any deposits and impurities, draining thoroughly each time.

After around three days to a week, the seeds should have germinated, and can be used either straight away or left to develop longer sprout tails. However, the sprouts should always be used before any true leaves develop. For a more complete description of the sprouting method, along with hints and tips for success, see our in-depth tutorial.

Which Sprouts to Grow

While in theory any edible seed can be sprouted, some provide better results than others. Here are nine of the most popular sprouts with the best combination of flavour and nutritional value.

Adult alfalfa plants have a bitterness that means they're not often grown as a food crop for humans. But at the sprouting stage it's another matter entirely. Thin, lightly crispy, and with a mild nutty flavour, alfalfa sprouts make a great salad ingredient when combined with a punchy dressing, mixed with noodles in a stir fry, or used raw as a garnish in place of chives.

Alfalfa sprouts are widely regarded as having significant health benefits, with their high antioxidant levels reputedly assisting with immune support, skin care, lower cholesterol, and almost anything else you could think of. But whatever some of the wilder claims you may see online, there's no doubt that alfalfa is a noted source of vitamins K and C, along with folate, manganese, iron, and copper. 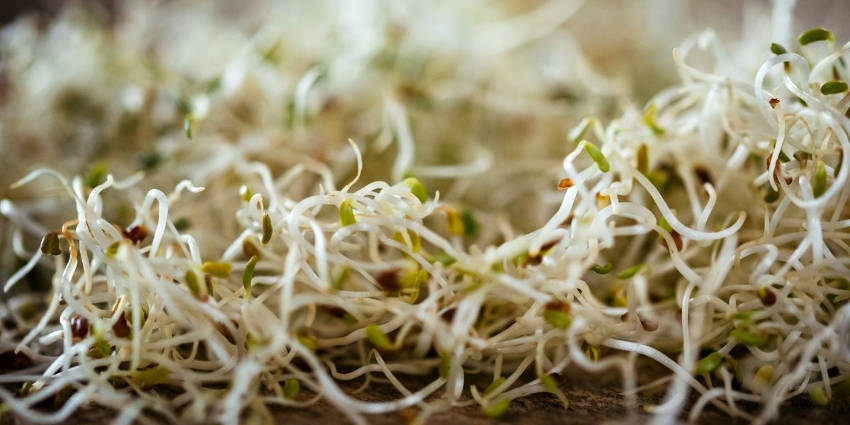 Snow pea sprouts pack all the crunchy texture and sweet, green-tinged flavour of the adult plants into the tiny sprout form, and can be used in all the same ways as alfalfa sprouts. However, their sweetness means snow pea sprouts are also great for livening up a healthy smoothie, or for making a hummus-like dip for scooping up with flat breads.

Snow pea sprouts are good sources of vitamins A, B, and C, and also contain higher protein levels than most other sprouts. Mung beans make the classic sprouting green, found in countless oriental takeaway meals as a bulking agent. Crisp and crunchy, juicily thick, and with a subtly grassy taste, they're great in salads, on a sandwich, or added to a stir fry for the last minute of cooking.

The main nutritional benefits of mung bean sprouts are vitamin C, with around 13% of the daily requirement, and iron with around 5%. Radish sprouts echo the spicy, peppery flavour of the adult bulbs, although without the harshness sometimes found in older radish. Along with their flavour, they also often have flashes of red at the tips of the slender sprout, making them an attractive option for a garnish with a kick.

Radish sprouts are rich in vitamin C and vitamin A, along with calcium, phosphorous, and potassium. Fully grown kale is a favourite ingredient of healthy smoothies, but its strong flavour, coarse texture, and dominating green colour put many people off from enjoying its undoubted benefits. However, when harvested in sprout form, kale has a much milder, sweeter flavour, along with the crunchy tenderness that's common to all sprouts.

Kale sprouts are rich in vitamin C, folic acid, and a wide range of minerals, which is why they're so often used in a smoothie or shake. However, kale can also produce sprouts in a variety of colours, from green through red to purple, making them a good choice as an attractive garnish or main salad ingredient.

Broccoli sprouts are at the thicker, chunkier end of the sprout scale, and are great for providing texture and crunch to quick-cooked dishes, or for bulking out raw ones without adding too many extra calories. Their flavour is nutty and spicy, but is surprisingly lacking in the metallic brassica edges of the adult plant. However, broccoli sprouts contain most of the same nutrients and antioxidants as the adult vegetable, making them a good option as a smoothie ingredient that doesn't overwhelm in colour or flavour. Out of all the sprouts, chickpea are perhaps the ones which taste the closest to their adult versions. Mild, beany, and creamy, the flavour will be immediately recognisable if you've ever cooked chickpeas, white beans, or other legumes.

As with the adult beans, chickpea sprouts are a great source of amino acids, folate, zinc, and potassium. However, sprouted chickpeas are much easier to digest, and so make a good option for those who find ordinary beans problematic. Linseed, also known as flax seed, provides a similar nutty flavour to other sprouts. However, the great advantage of this seed is that it provides high levels of omega-3 fatty acids, making it an important complement to a vegetarian or vegan diet. And while raw linseed is often used as a crunchy topping for salads, sprouting the seeds makes the nutritional elements easier to digest, making it even healthier. Lastly, chia sprouts offer a very mild flavour with peppery tones, similar to poppy seeds but with a slight bitterness. The sprouts themselves are a vibrant green with a white stem, looking similar to garden cress, and are often used in the same ways.

Chia seeds are renowned for their nutritional content, packed with iron, magnesium, and other minerals, alongside plenty of dietary fibre. As with linseed, sprouting chia seeds fully unlocks the nutritional value, increasing their benefits even further. Sprouts offer an excellent combination of flavour and health, but most supermarkets only stock a small selection. By growing your own you'll be greatly expanding the horizons that sprouts can offer, as well as providing produce for the table when the outdoor growing season is at its slowest. If you want to put fresh, homegrown food on your table as quickly as possible, sprouts are hard to beat. Here are nine of the most popular and versatile seeds to sprout, going from seed packet to plate in just a few days. If you've visited and high-end restaurants over the last few years you've likely eaten microgreens. These tiny herb and vegetable shoots pack a powerful punch but are hard to find in supermarkets. Luckily, they’re very east to grow at home, and this art

5 Reasons You Should Grow Microgreens for Your Kitchen Sprouting seeds is probably the fastest way of putting home-grown food on your plate. This article explains the benefits of sprouts, and gives a clear, step-by-step guide on how to start sprouting at home. Microgreens have been an essential highlight of modern kitchens over recent years, but they're far more than a passing trend. This article explains what they are, how to grow them, and why every green-fingered food lover should give them a try.

How to Grow Microgreens - Its Simple and Quick but Intensely Rewarding